It is on the old forums, but I want you know, one over here. Who plays your dude/dudette/major npcs in movie version rp nerdness. PICS PLZ.

<3s!
So if you meet me have some courtesy, have some sympathy and some taste. Use all your well-learned politesse or I'll lay your soul to waste.
Top

Nathan Fillion would do a damn fine Lansiron:

Unless he's just putting in a non-speaking cameo, in which case he'll be portrayed by Rhapsody of Fire guitarist Luca Turilli, who actually looks like him, but I doubt he would really play the role...unless Lans has what'd probably be a thick Italian accent (I assume. I've never heard this guy talk. Only shred.):

Norvallen I'm stumped on. Can anyone name a very tall (character's height is 6'4") blonde who's good at seeming sociopathically austere and otherwise sardonic?
Top

Also, jesus christ she's incredibly tall.
Now hang me by this golden noose
'Cause I never been nothin' but your golden goose
Silver tongue don't fail me now
And I'll make my way back to you somehow
Top

Lans, what about Heidi Klum? She's like, 5'10 or something.
Last edited by Yva on Thu Apr 30, 2009 8:58 am, edited 1 time in total.
So if you meet me have some courtesy, have some sympathy and some taste. Use all your well-learned politesse or I'll lay your soul to waste.
Top

Her tallness is 'cause of that whole "valkyrie" motif, or some such. That and to make up for the fact that Lans is only about 5'8".

Coming to think of it, Uma Thurman probably dead-on. Looks are different than how she's drawn, but hell, I can see her nailing the personality and vibe, and screw looks for the sake of that. She's also about the exact right age. Even managed to get a picture where her hair is nearly exact:

Thanks, Tarq. And even if she ain't Heidi Klum, well...we got that eye-candy anyway!
Top

True story, I have a friend who looks /a lot like Uma/.
So if you meet me have some courtesy, have some sympathy and some taste. Use all your well-learned politesse or I'll lay your soul to waste.
Top

Tarq is, for anyone who somehow didn't know, played by the inestimable Ewan McGregor and His Beard.

Jak has always been somewhat more difficult to cast - possibilities have included Sean "Simon Tam" Maher, Jamie "Lee Adama" Bamber, and Eric "Lots of Awesome Roles Including That Kickass Jew in Munich" Bana. At the moment, I'm thinking about James Purefoy, primarily due to his portrayals of Marc Antony in Rome and, yes, Edward Plantagenet in the way-better-than-it-should-be A Knight's Tale

He's somewhat older but I think it's workable.
Now hang me by this golden noose
'Cause I never been nothin' but your golden goose
Silver tongue don't fail me now
And I'll make my way back to you somehow
Top

One day, Marty says to me, "I saw Threnn on a magazine cover." It was something like Consumer Reports or Smart Shopper or the like. I went to the bookstore and found it, then found her name, and lo: Deanna Russo.

(Who is, apparently, in Knight Rider now. That little smile is so perfect.

Davien's a tough call. Morena Baccarin was a good candidate, but then, there's Saffron Burrows, who played Andromache in Troy. And? She's tall IRL, too. 5'10" or thereabouts (Davien is juuuust shy of six feet.)

Shaila'd be played by Ellen Page. Yeah she looks young, but so does Shai. I think she'd be able to nail the spunk while keeping the maturity Shai's able to show. She's also very small.

For Akeelah, Charisma Carpenter. One of her characters was what I based Aki off initially, after all.

Closer set eyes, angular face, craggy look - all check. Originally started with Gabriel Byrne (mostly because of his portrayal of Uther Pendragon in Excalibur), but found the eyes to wide and far apart. Nykkomiakas was right - this fits better. 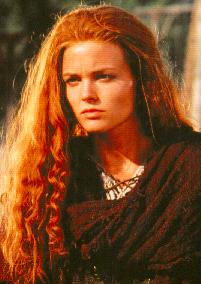 "I left my home where the dead never rose
But the streets of gold i've yet to find
And at the end of the day all you can do is pray
Without hope well you might as well be blind, yeah be blind
Tomorrow comes a day too soon"
Top
Post Reply
94 posts

Users browsing this forum: No registered users and 4 guests